The last female portrait by Vienna’s iconic painter, Gustav Klimt’s Lady with Fan gazes seductively and with remarkable self-confidence into the distance. This vibrant painting is on show in Vienna again after more than a century. It will be presented with other examples of Klimt’s last works in a special exhibition at the Upper Belvedere. 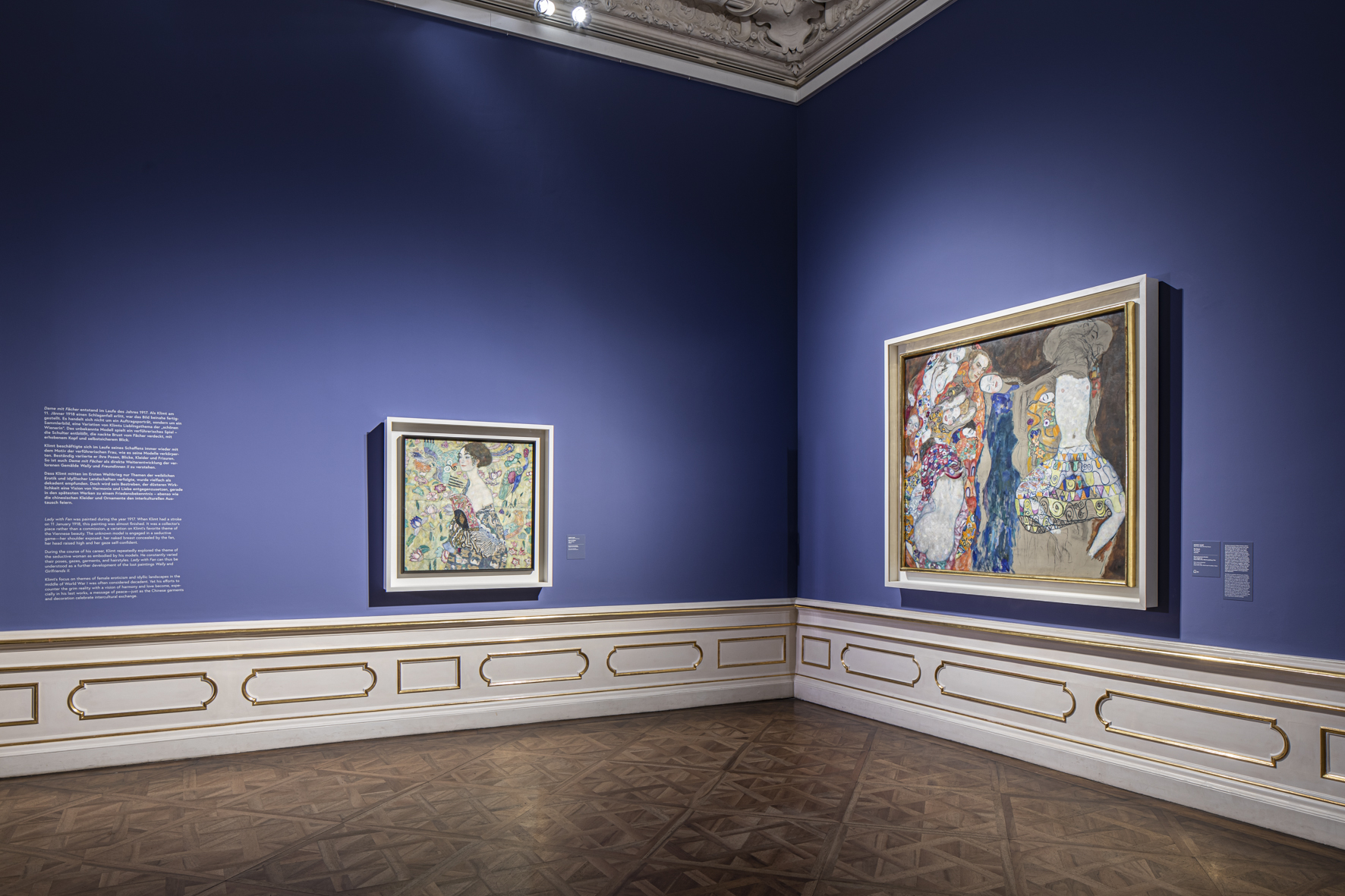 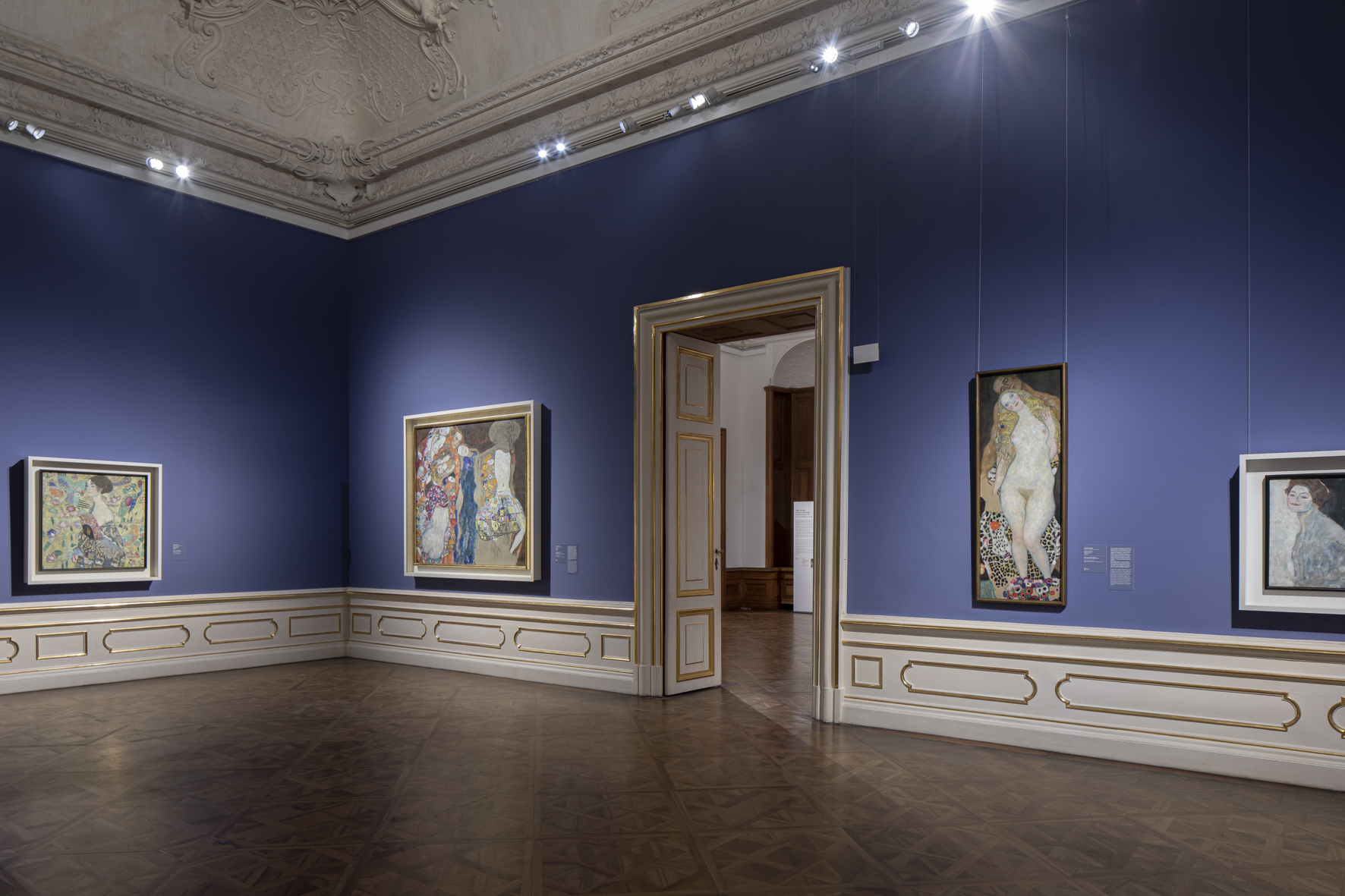 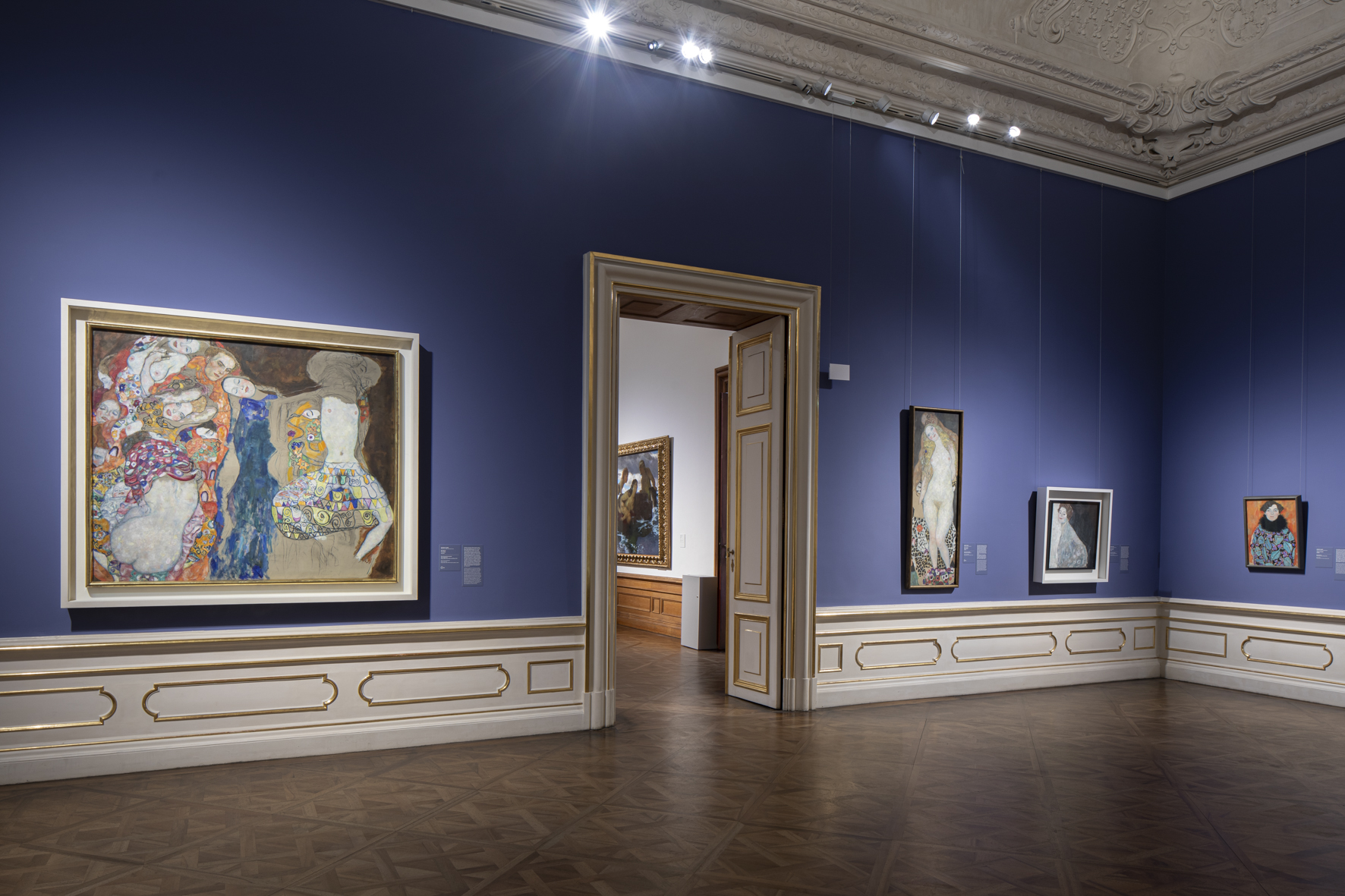 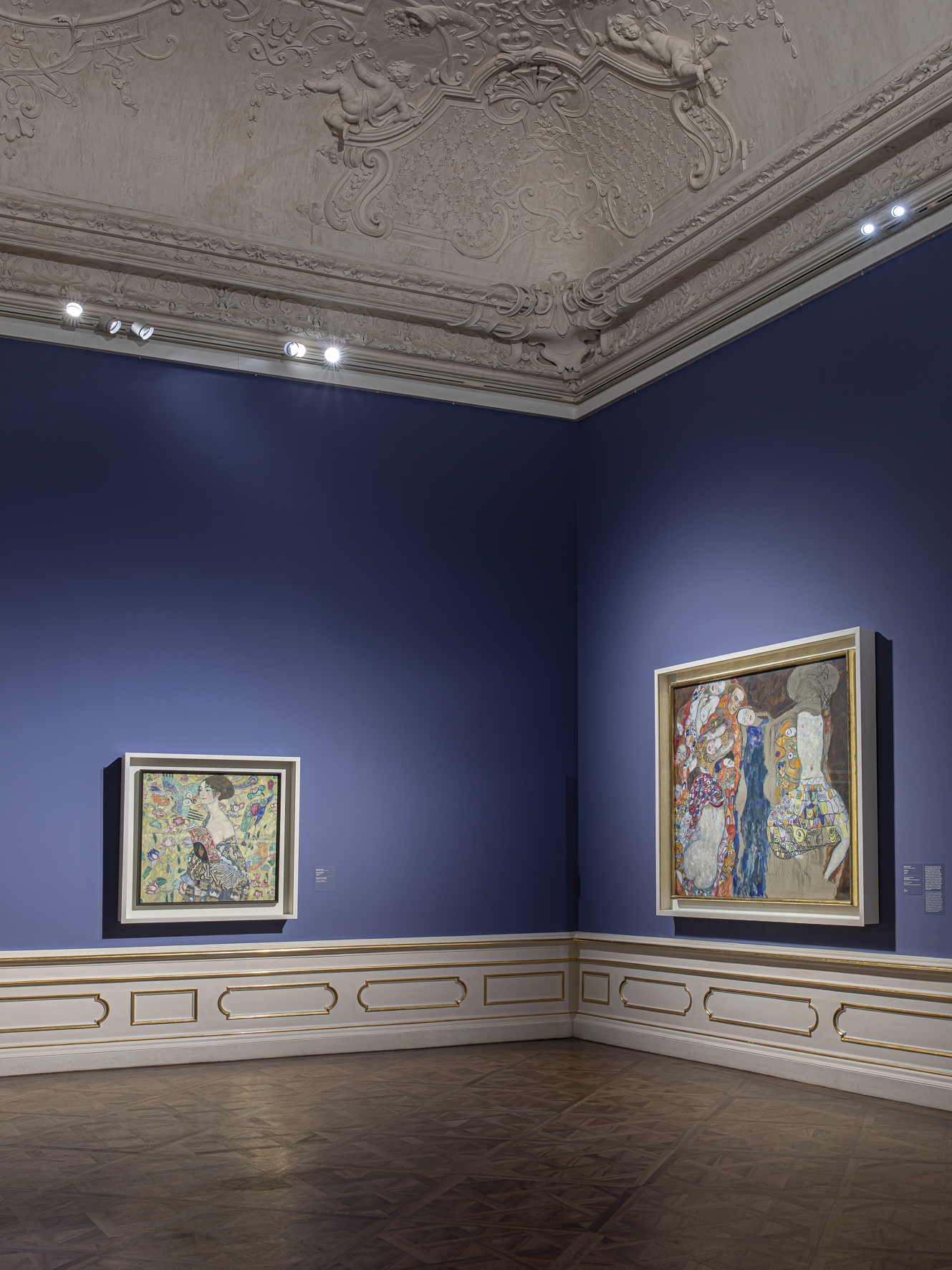 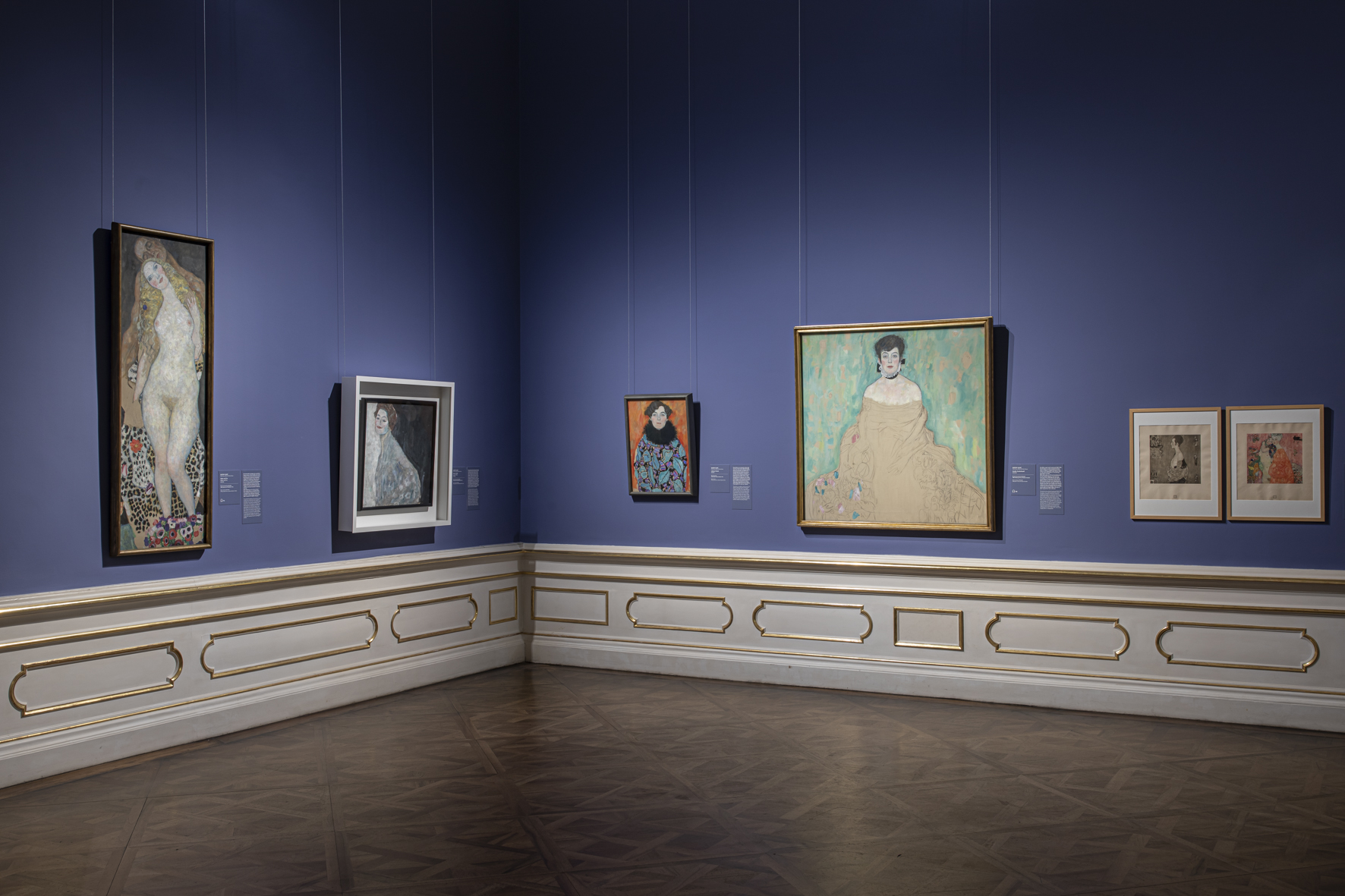 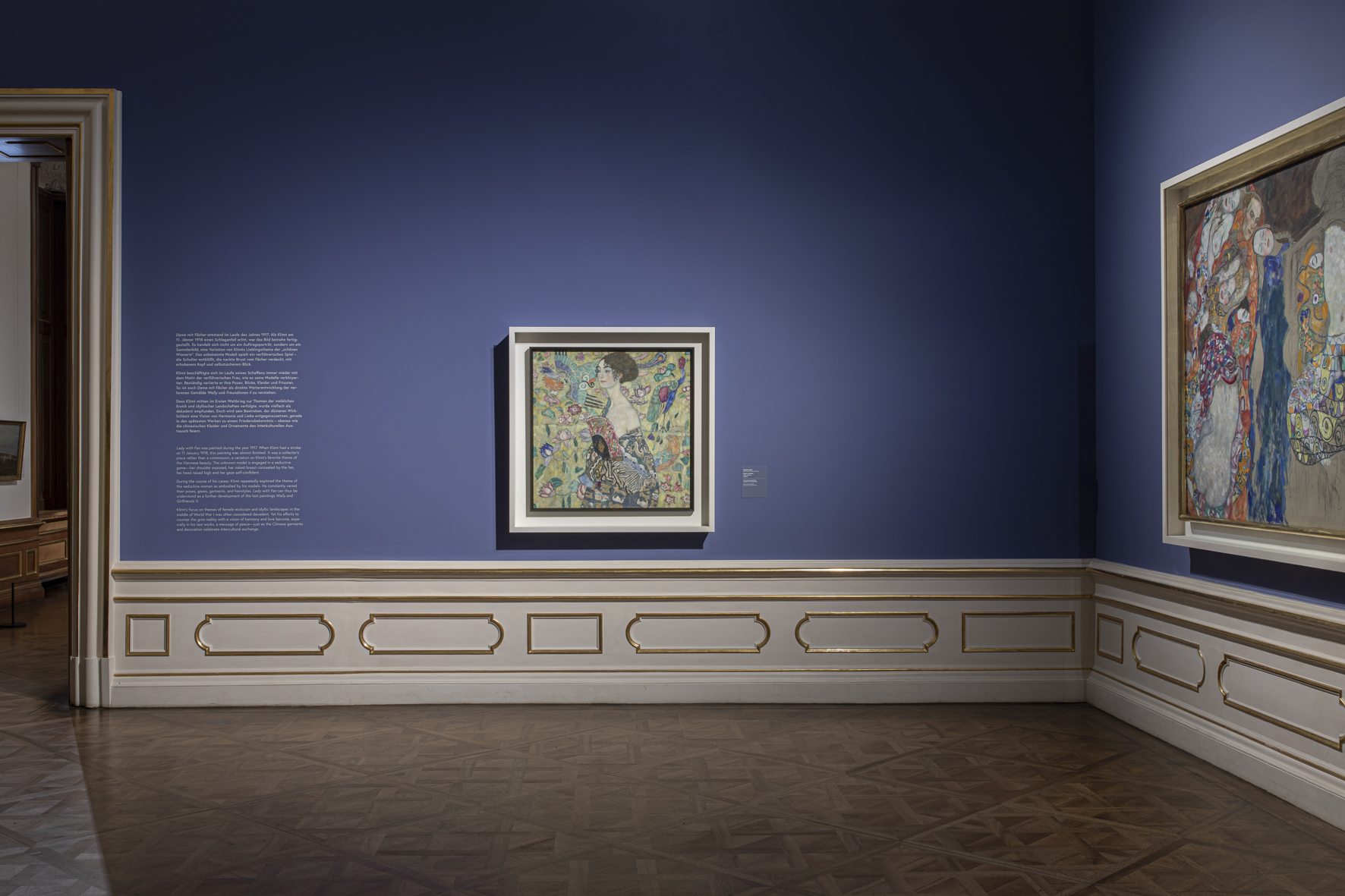 Shortly after Gustav Klimt’s death in 1918, a photograph was taken in the artist’s studio. It shows two paintings, each displayed on an easel: Lady with Fan and the unfinished work The Bride. While the latter has been on loan to the Belvedere for decades, the arrival of Lady with Fan in Vienna represents an important addition to the display of Gustav Klimt’s oeuvre. The Belvedere is presenting a fascinating show about the final artistic phase in the work of Vienna’s iconic artist.

Lady with Fan was the last painting Klimt worked on during the year 1917, and, except for a few details, he was able to finish the work. Whereas most of his portraits show society ladies, in this picture Klimt has probably painted an unknown model. Its subject is a variation on one of his favorite themes: the Viennese beauty. The seductive game of this unknown woman, who was probably a dancer, seems self-confident and assured. With her head held high, her shoulder exposed, and her naked breast concealed by a fan, she gazes out beyond the viewer.

Lady with Fan has only been exhibited once in Vienna: over a century ago at the Kunstschau in 1920. The picture was temporarily part of the Rudolf Leopold collection. It was shown at a public exhibition in Tokyo in 1981 and in Krakow in 1992.

Now this painting is returning to Vienna where it will be presented at the Upper Belvedere in a two-part exhibition. Part one shows Lady with Fan in the context of Gustav Klimt’s late unfinished works including The Bride, Amalie Zuckerkandl, Adam and Eve, and Lady in White. In October, the exhibition will be adapted and further components added. The new chapter will examine Klimt’s interest in East Asian art and highlight how these influences are reflected in his work. Lady with Fan: Gustav Klimt’s Last Works conveys how, shortly before his death, the painter was entering a new artistic phase. 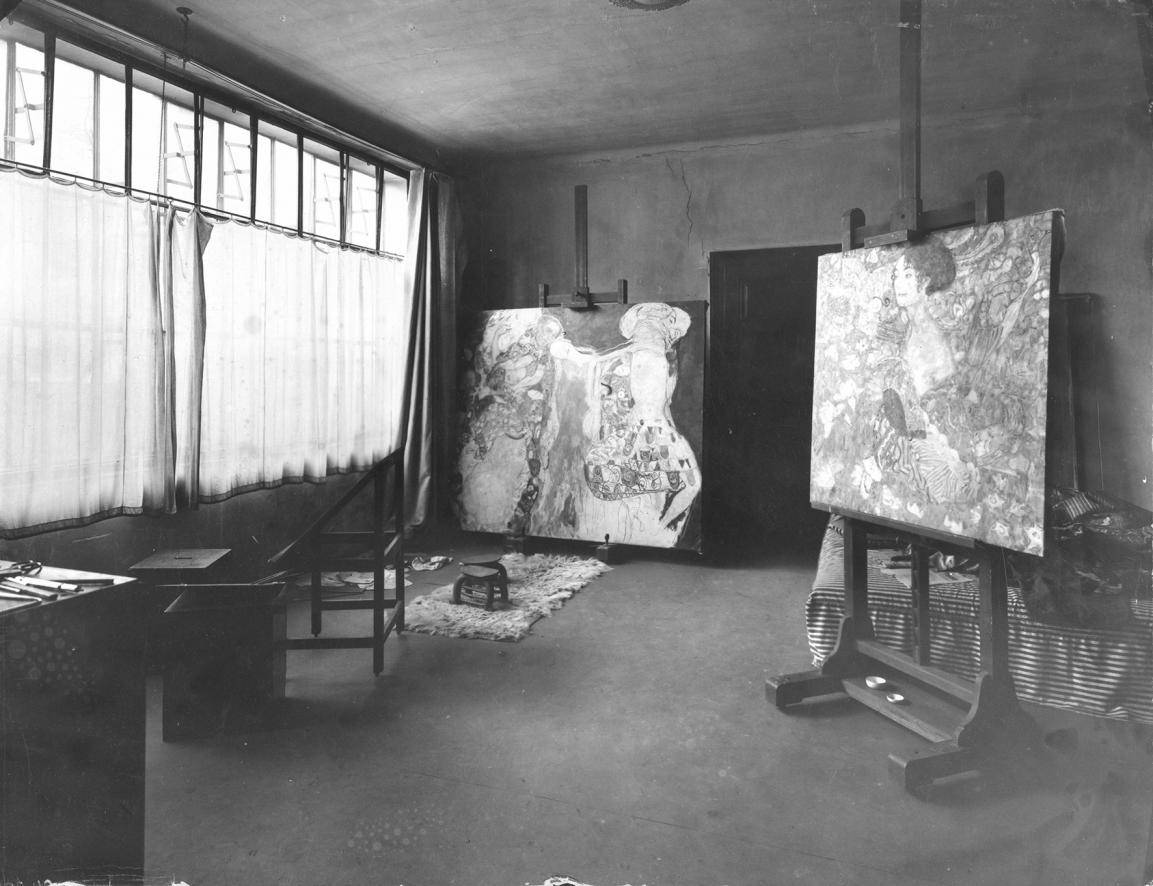 Shortly after Gustav Klimt died in 1918, a photograph was taken in the artist's studio. It shows two paintings, each displayed on an easel: Lady with Fan and the unfinished work The Bride. While The Bride has been on loan to the Belvedere for some time, the arrival of this portrait of a lady in Vienna represents a critical addition to the overall presentation of Gustav Klimt's life's work. The Belvedere is presenting a captivating show on the last major creative phase of the Viennese icon.

Lady with Fan was the last painting Klimt was to work on during the year 1917, and with the exception of a few details, he nearly completed the work. While most of his portraits depict society ladies, Klimt probably painted an unknown model here. The subject is a variation on one of his favorite themes: "Viennese beauties." In the seductive presentation of this unidentified woman, probably a dancer, she appears self-confident and poised. With her head held high, her shoulders exposed, and her bare bosom covered by a fan, she gazes out beyond the viewer. Part One of the show presents Lady with Fan in the context of Gustav Klimt's late, unfinished works; among others on view are the paintings The Bride, Portrait of Amalie Zuckerkandl, Adam and Eve, and Lady in White. 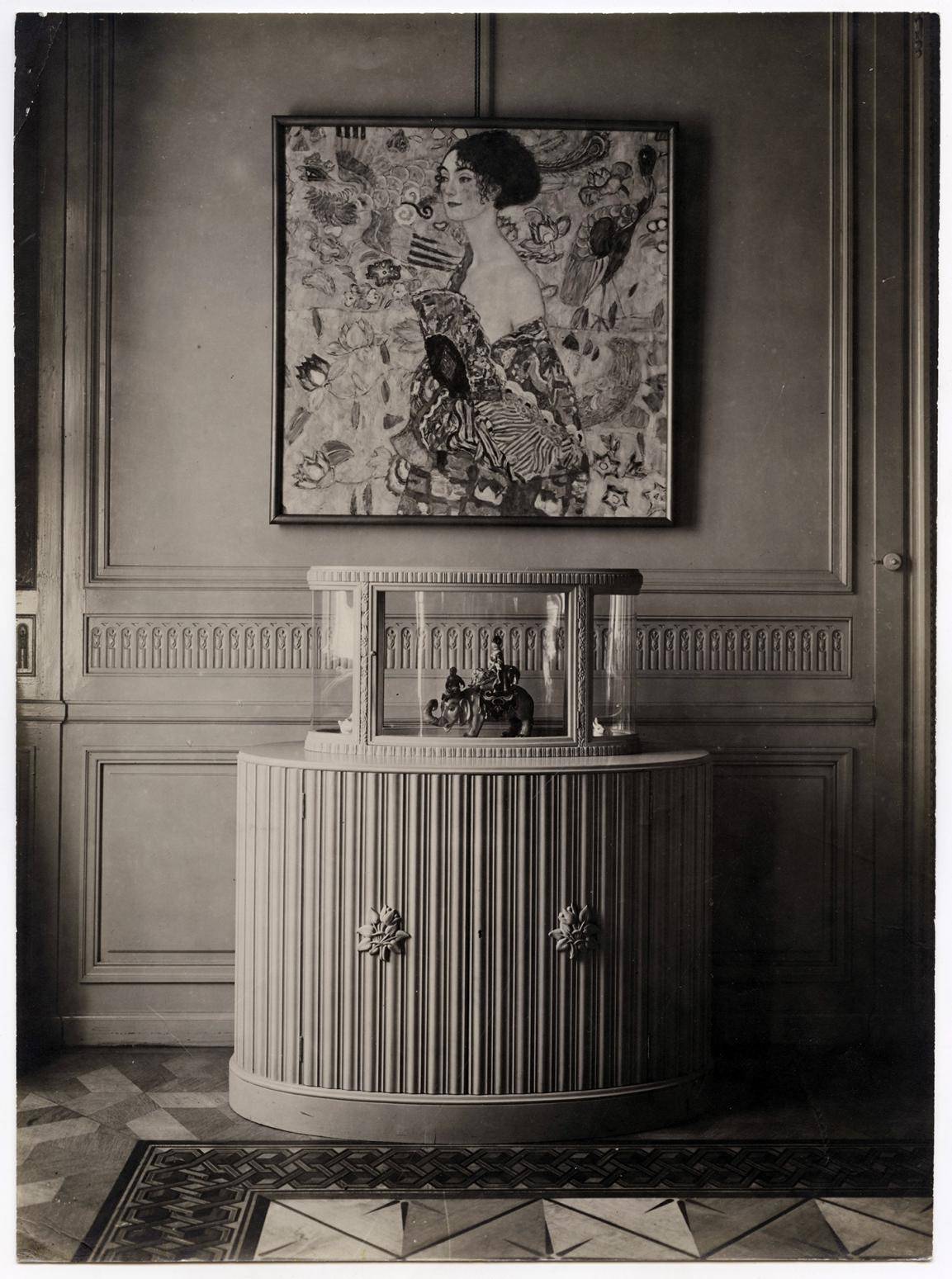 Gustav Klimt began studying East-Asian art as early as the 1890s. Initially, he was primarily interested in Japanese art, but in later years turned to Chinese, Korean, Persian, or Indian creative styles. Klimt adopted not only decorative elements from the art of these countries but also compositional aspects. He studied typical color schemes, for example, and transferred them into his paintings.

Lady with Fan was influenced by Chinese and Japanese art especially. Wrapped in a Chinese robe, the lady flirtatiously hides behind a decorated fan. The yellow wallpaper in the background features several characteristic motifs that are ubiquitous symbols of good fortune in East-Asian art: the Chinese phoenix (fenghuang), a crane, a golden pheasant, and the lotus flower. Another reference to Japanese painting is the lady with a fan herself: bijin-ga, Japanese woodblock portraits of beautiful celebrities such as geishas, featured prominently in Klimt's extensive collection of Asian artifacts.

Like Schiele, Kokoschka, and other artists from his circle, Klimt was a member of the Vienna Institute for Cultural Research. Founded in 1915, the institution advocated a pacifist, egalitarian world culture and rejected the idea of the cultural superiority of the West, a notion widespread at the time. Klimt's paintings embody his belief: European and Asian pictorial traditions are brought together in equal measure to form a harmonious symbiosis. 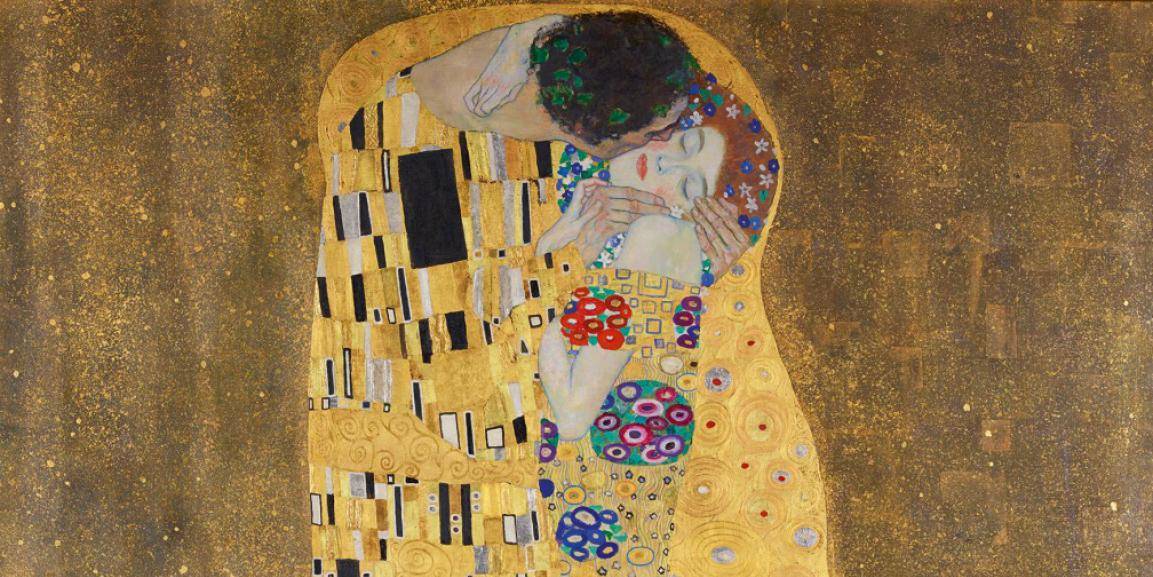 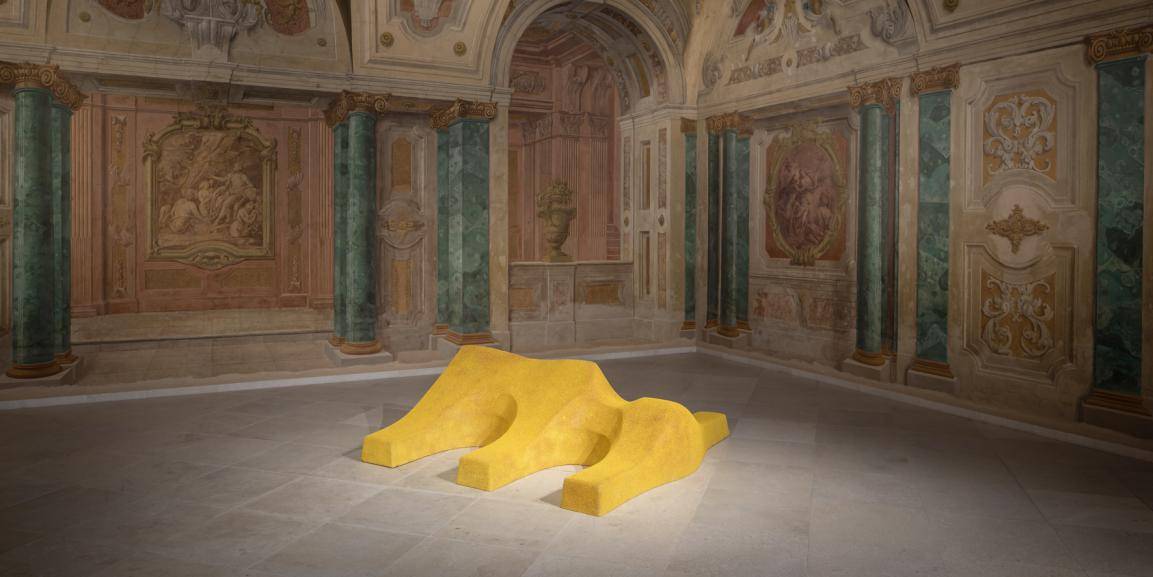 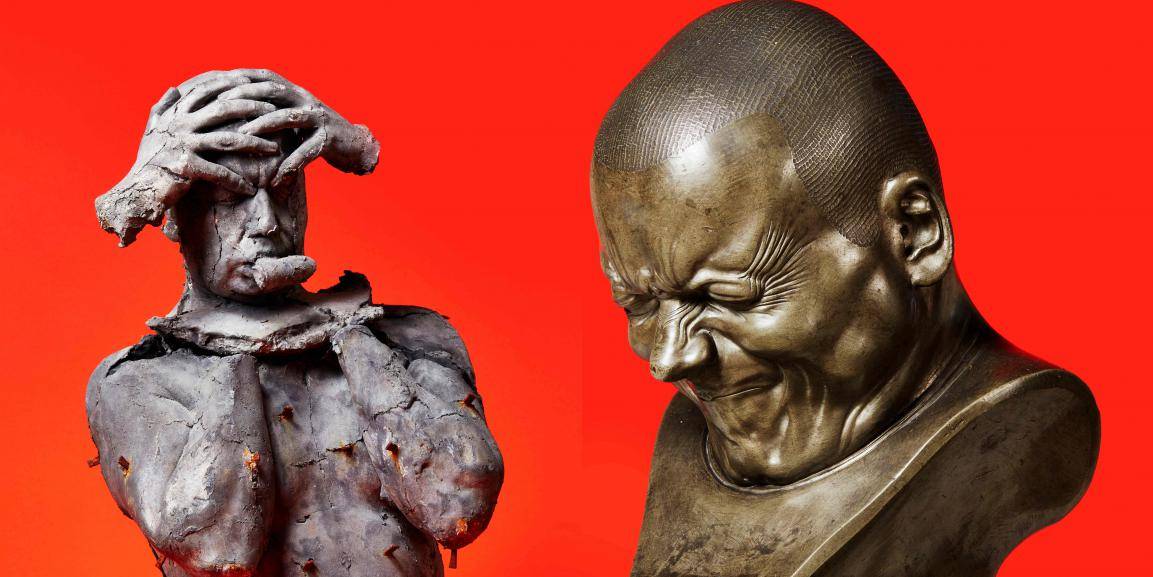 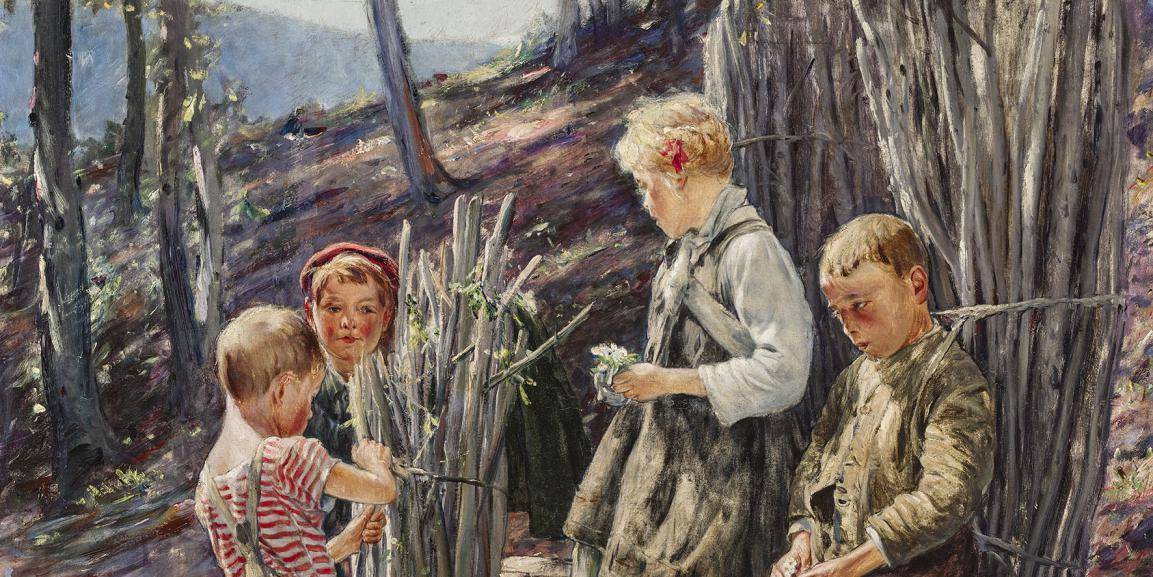 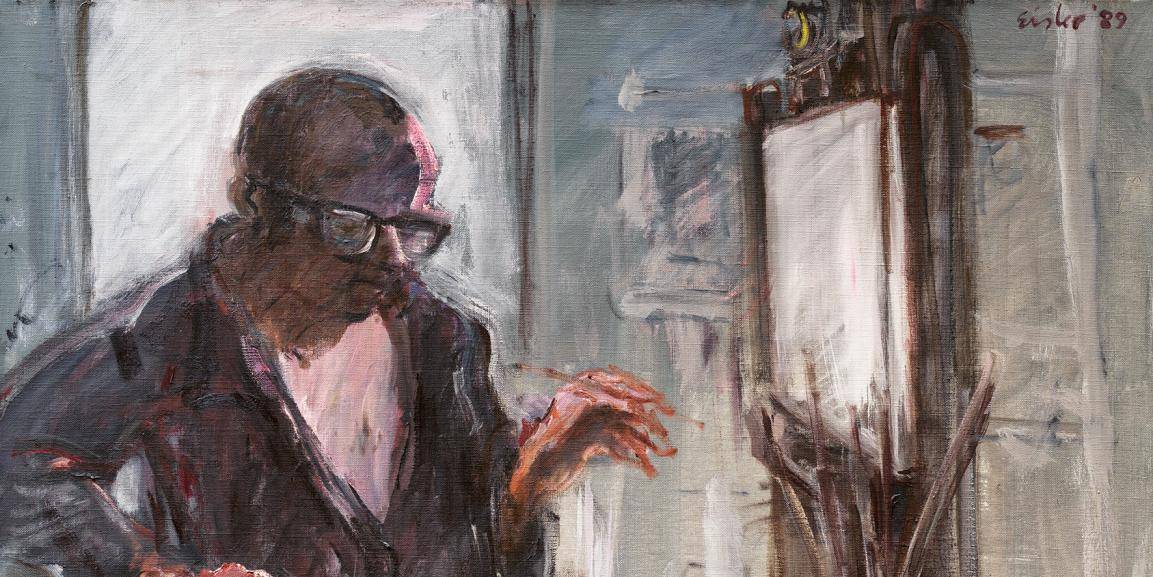